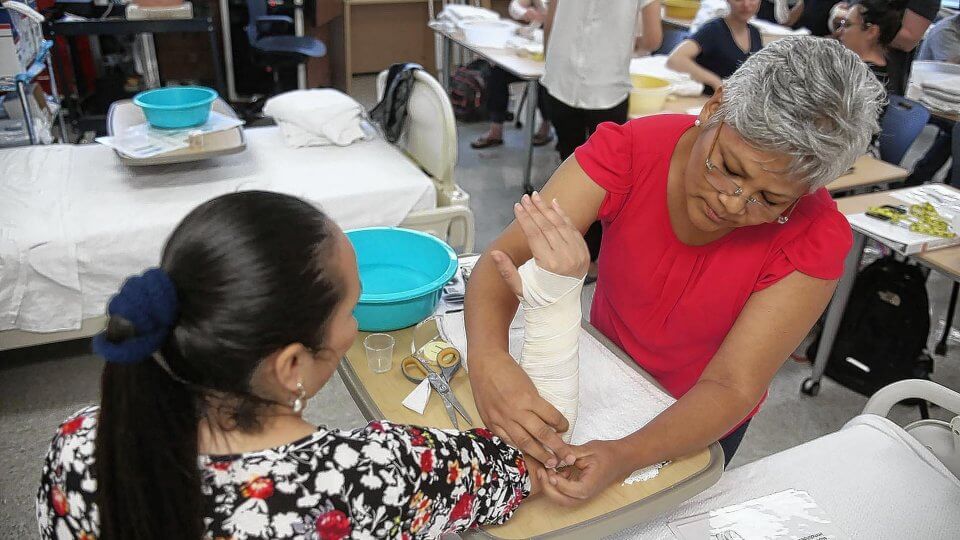 Otterbein University’s nursing program is extending its reach beyond Westerville with the help of its Healthcare Education Simulation Station.

It recently provided a group of nurse educators from Honduras access to hands-on training and low-cost equipment to help train nurses and save lives in their own country.

Jeff Becker, chief maker at edgeThingZ, a product-realization hub at Otterbein, is partnering with Central American Medical Outreach to provide a low-cost classroom technology program in partnership with Otterbein’s nursing department, according to Jenny Hill, a university spokeswoman.

The university’s HESS offers an alternative approach to high-cost nursing-simulation equipment to benefit nursing education and nursing outcomes globally. The HESS system costs $49 per month to provide, compared to the $100,000 a high-tech training mannequin can cost and $1 million for a full-simulation center, according to Hill.

Central American Medical Outreach Inc. is a nonprofit that strengthens health-care systems and provides support for sustainable community development in central America, according to its website, camo.org.

The organization has a headquarters in Santa Rosa, Honduras, a city that is home to five universities. Services provided or supported by CAMO include a domestic-violence shelter, a community gym, a trade school, a daycare center, a cultural center, literacy programs, medical programs and research, and a public health center.

Kathy Tschiegg started the program outreach program in 1993 after the conclusion of her Peace Corps service in Honduras. She said she was devastated about the loss of 31 babies during her last month of service in the 1980s. The deaths were a result of not having the supplies, equipment and educated staff, she said. She said she returned in 1989 and found conditions were even worse than when she left in those terms.

“At that point, I started thinking about how I make a program to solve those problems,” she said.

Otterbein, CAMO and edgeThingZ teamed up to make the training available through the HESS system. The system uses various devices, such as a pulse oximeter and thermometer, that can simulate the required key vital signs for a variety of healthcare-simulation scenarios. The devices can be used with less expensive, low-fidelity mannequins and even human actors, according to the university’s website.

A group of four nurse educators from four universities were brought to Otterbein for training May 17-19. Ana Julia Melgar Martines,Thania Lineth Estinal Aguilar, Kenia Daliceyh Calderon and Teresa Maribel Carrillo Salgado are all nurse educators who were able to receive training in real-life scenarios with the HESS system.

“These seven days helped me to learn very much and it was very good with the nurses of the other universities. We have learned another way that is an economical way and will help us to elevate our scientific principles. It will help us in advancing the skills of our students,” Salgado said.

She also said it was a great experience to meet other nurses passionate about education.

Tschiegg said this training is life changing because of the reduction in cost.

Tschiegg said she’s hoping the HESS system and training can also be a chance for the country to move forward past poverty and crime.

“They want their country to be better,” Tschiegg said. “These doctors and nurses are passionate about what they do and they love their country,” she said. “I think that says a lot.”